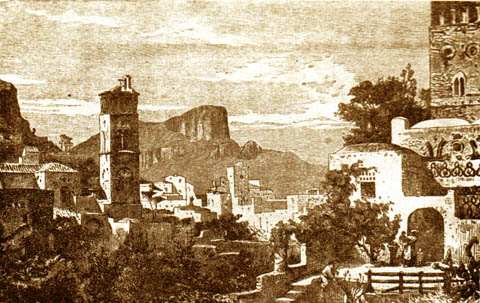 Music. On his arrival at Villa Rufolo in 1880, Richard Wagner found both inspiration for the scenography of Act 2 of Parsifal and ideas for improving the whole musical architecture of his ultimate masterpiece. The orchestral concerts that have been held in the Villa for over 50 years are a worthy tribute to this inspiration. Giuseppe Verdi was another guest at Villa Rufolo; Grieg stayed in the Albergo Toro; outstanding conductors and performers – from Bruno Walter to Toscanini, Stokowski to Kempff, Bernstein to Penderecki, Prêtre to Maazel, Ashkenazy to Pappano – have all stayed and performed here. The musical vocation remains at the heart of the intense cultural life in Ravello.

Visual arts. Outstanding artistic figures have also stayed and found inspiration in Ravello: one only needs to recall Ruskin, in the19th century, and subsequently Miró and Vedova. Escher developed his characteristic labyrinthine style during several stays at the Albergo Toro and also met Jetta, the girl who was to become his wife.

Literature. In the Decameron, Giovanni Boccaccio drew inspiration from the gardens of Ravello for the fairy-tale settings of his tales, and dedicated a particularly delicate tale to the adventures of Landolfo Rufolo of Ravello. Closer to our times, in the early years of the 20th century, André Gide set some of the key episodes in his novel L’immoraliste in Ravello; E. M. Forster spent a holiday here, and the Carosa fountain and Villa Episcopio featured in the long and very moving The Story of a Panic. Here too members of the Bloomsbury group – including notably Lytton Strachey – stayed on several occasions in the Albergo Caruso, while Lord Grimthorpe created Villa Cimbrone, a haunt for intellectuals from all over the world. D. H. Lawrence made several visits to Ravello, staying at the Albergo Rufolo, at the time when he was writing his masterpiece, Lady Chatterley’s Lover. Paul Valéry left a characteristically lofty sentiment in the guest book of the Albergo Palumbo. After the Second World War it was the turn of Graham Greene, Tennessee Williams, William Styron, Guido Piovene, Domenico Rea, Thomas Mann, Theodor Adorno, Truman Capote, who wrote the script for John Huston’s film Beat the Devil, and Gore Vidal, who wrote many of his literary masterpieces at Villa Rondinaia.. Ravello is further the subject of a very intense poem by Rafael Alberti.

Science. The sciences too have a place in the cultural pantheon of Ravello: the economist Keynes stayed at the Albergo Caruso, the biologist Crick at Villa Cimbrone, and the pedagogue Piaget at Villa Maria. Here there is the permanent headquarters of the Centro Europeo per i Beni Culturali.

History. Enthusiastic visitors to Ravello have included heads of state like Luigi Einaudi, who stayed at Villa del Pendolo and François Mitterrand, who sojourned at Palumbo. In February 1943 King Vittorio Emanuele III took up residence in Villa Episcopio, and several sessions of the Badoglio government were held here, involving such political leaders as Croce, Togliatti and De Gasperi. It was here that the King appointed his son Umberto as interim ruler.